In more detail, what do they do?

They accomplish these through a variety of subsidiaries they’ve acquired. The most publicly eye-catching brand is its newly-launched HealthInsurance.com. 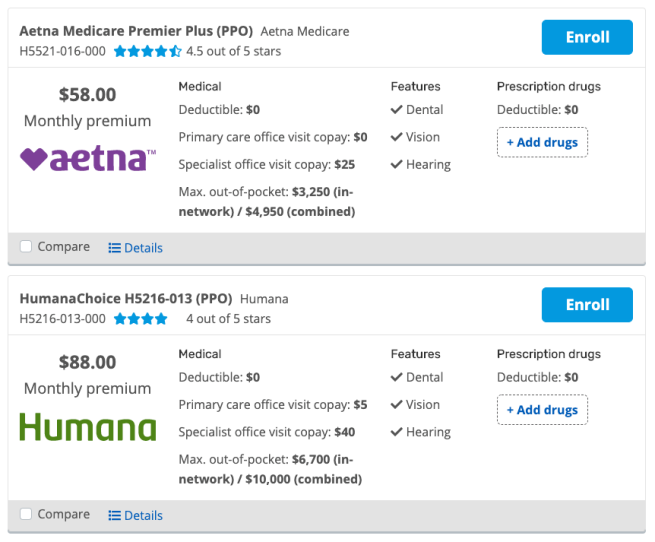 This is arguably the greatest brand to own if you’re in the health insurance business. Benefytt bought this website domain name in July 2019 for a little over $8 million dollars.

And how do they make money?

The two big business segments have a couple of different revenue streams:

Below is the summary of their annual revenue and profit split by these two segments: 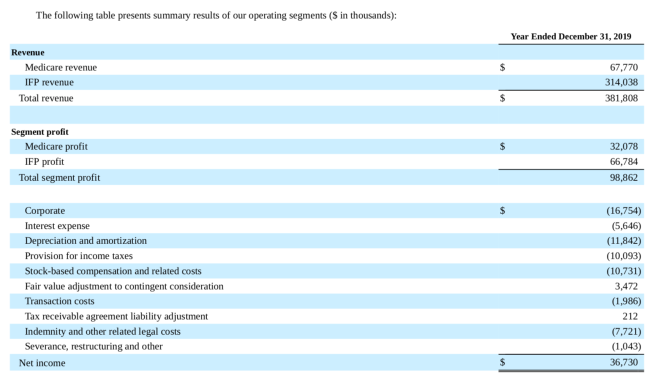 It is most important to note that while the Medicare segment is currently much smaller, its profit margin is about 47% versus the 21% for the IFP segment. I will expand upon this distinction later in the report.

“The health insurance products we sell are underwritten by third-party insurance carriers with whom we have no affiliation apart from our contractual relationships. Other than with respect to the activities of Benefytt Reinsurance…we are not an insurer, we assume no underwriting, insurance, or reimbursement risk.” – BYFT 2019 Annual Report, Page 6

The purchases the past couple years have been:

When a company is buying its own stock back in the public market, they typically either believe it’s undervalued or they’re trying to explicitly push the price higher.

With the stock price now well below where management was buying it before, I would not be surprised if they continue to buy more of it now. This also implies they think the stock should be worth more than the $32-$36 range they paid for it.

Why Has the Stock Declined Since Then?

First, and most obviously, is the coronavirus. From its March peak of $30, the stock declined 50% to a bottom of $15 before bouncing back last week to about $22 today. This decline has mirrored most of the stock market.

Second, the IFP revenue was down 10.6% in 2019 from 2018. Although profit was actually still up 12.4% for the IFP segment, this could be seen as a short-term drag on what’s called “top-line” overall revenue growth.

Third, cash flow was negative (-$4 million) in 2019 due to a bunch of acquisitions (including HealthInsurance.com).

Fourth, the company has taken out about $180 million in debt from credit lines and loans to help pay for the aforementioned acquisitions.

The three latter reasons can be explained by management. All that spending is investment in a pivotal strategic shift: Medicare.

Medicare Advantage is The Next Big Thing

“On December 20, 2019, we announced a change in our overall business strategy to accelerate growth within the Medicare segment. The IFP segment will be de-emphasized moving forward and our focus for IFP will be to maximize cash flows….We will be able to use cash flows from the IFP segment to invest in accelerating growth of the Medicare segment.” – Page 38-39 of the 2019 BFYT annual report.

On June 5, 2019, just a month before the HealthInsurance.com acquisition, BFYT bought a company called TogetherHealth for about $50 million in cash, $12 million in stock, and another $50 million in future bonuses (“earnouts” in their financial terms) to the TogetherHealth team if they hit certain revenue targets over the next few years.

TogetherHealth was founded in 2010 as an insurance sales and brokerage specializing in Medicare and the over-65 age group.

By combining the salesforce and insurance carrier relationships of TogetherHealth, the online branding and insurance processing platform behind HealthInsurance.com, and the existing cashflow coming from the ongoing individual and family health insurance sales, they are creating a Medicare insurance sales machine.

As a quick primer in case you are young and only vaguely know what Medicare is, Benefytt explains it on pages six and seven of its annual report:

The reason Medicare insurance is such a unique growth area right now?

A new rule change by the Center for Medicare and Medicaide Services which activated in 2020 allows for:

This rule change and the expansion of access to Medicare is a government priority made clear in the 2020 address by the Secretary of Health and Human Services Alex Azar:

“Convenient, tailored benefits to promote health is also what we’re trying to do with new flexibilities in Medicare Advantage, which now allows plans to provide more supplemental benefits, such as home-delivered meals, transportation, and home modifications.

You may or may not be aware of that change, but if you watch a lot of cable news—which none of us should do, unless it’s to see Dr. Fauci talk about coronavirus—you may have seen frequent commercials talking about how Medicare beneficiaries can call a 1-800 number to inquire about whether they’re eligible for these new benefits….

One particular ad looks a bit like something out of the 1990s, with red, white, and blue graphics, and, to complete the picture, there’s an NFL star from the 1960s involved.

On its surface, this doesn’t look or sound like the future of healthcare—but it represents important work done here at the department, placing patients at the center and providing them with a tailored set of benefits that will keep them healthy and keep their costs affordable.

We’ve delivered significant results on affordability over the past year: Average Medicare Advantage premiums are now the lowest in 13 years, while Part D premiums are the lowest in seven years. We saw 1,200 MA plan options added from 2018 to 2019. These are real savings for our seniors—let’s thank everyone at CMS who worked hard to make that happen.”

The red, white, and blue ad which Mr. Azar is referencing was created by TogetherHealth/Benefytt Technologies, and the video has been made available courtesy of the investment firm Citron Research:

The value of telemedicine can be seen in the stock price of the company Teladoc, the leading provider of doctor-over-the-phone services, doubling in the last three months.

Teladoc’s sessions can now be covered by the insurance sold through BFYT.

BFYT is Actively Looking to Be Bought

Just as appealing to investors than the opportunity for insuring Medicare and new kinds of doctor-patient relationship is that Benefytt is a company that is trying to sell itself to larger firms.

Coming straight from page six of their annual report:

Who would buy them? Two major obvious types of buyers would be existing health insurance giants who Benefytt already partners with like Aetna and Humana, or private equity firms would plan to simultaneously ride the Medicare growth while finding ways to cut costs and make back their investment with a return over the next decade, if not flip it to the insurance giants.

Benefytt is not trying to sell out of desperation. It’s because they’ve seen how much their competitors have sold for in just the past couple years.

Disclosure: I have not done a complete financial model for BFYT. This would ideally and primarily involve estimating the next few years worth of approved insurance applications, especially for Medicare Advantage, multiplied by the profit or lifetime value per application, and compare against any decline in the non-Medicare business.

However, we have a couple of close comparison companies that can demonstrate how undervalued BFYT is right now.

Last year, GoHealth, a health insurance search and sales company based in Chicago, was sold to a private equity firm for $1.5 billion dollars when it had an estimated $500 million in annual revenue (I actually spoke with GoHealth a few years ago when I was considering joining them).

In the past two years, another health insurance shopping website called eHealth has seen its stock increase 5x from $20 to $120 per share.

The valuation used for Benefytt is the Enterprise Value which includes its debt. eHealth has no debt and GoHealth’s valuation is based on what we know from the press about its acquisition.

Benefytt’s market capitalization is only about $290 million, less than its annual revenue (the Enterprise Value is this plus the $179 million in debt minus some cash). This can happen to companies which either have declining revenue, are not profitable, or have debt. Benefytt has one segment that is declining (IFP), but management has already stated that IFP is less important than its new, growing Medicare business, and Benefytt is profitable in both its segments. We’ve already covered the debt being taken out specifically to fund the Medicare acquisitions.

Let’s ignore eHealth for now because its numbers scream too-good-to-be-true (eHealth is possibly overvalued). If Benefytt were valued similarly to GoHealth, it would be a more than billion dollar business with stock worth at least $50 per share, more than double its current $22 price.

Alternatively, we could get to roughly that same number based on the Price-to-Earnings ratio. Right now, Benefytt is trading at a “P/E Ratio” of roughly 8.4. The S&P 500 average is right now about 19. If we believe Benefytt’s profits will grow at a faster rate than the average S&P 500 company (which we are assuming will happen due to the Medicare strategy), then its stock would trade in the mid-$40 range if it were valued like the S&P 500 average.

Recall the company’s buyback plan? Management already believed the company was worth more than $36 per share. Investors now have a chance to get in at an even lower price.

Can a company’s valuation swing upward that quickly? Yes, because we’ve already seen it happen to both Teladoc and eHealth.

Risks and Where I Could Be Wrong

Despite the above risks, Benefytt Technologies has the benefits of:

If the above plays out as planned, BFYT’s value could double within the next couple years as Medicare Advantage becomes an established insurance product for the elderly.

View all posts by loganfrederick